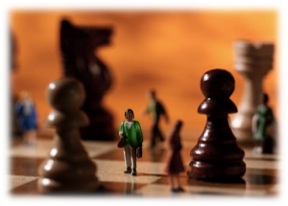 So what does this have to do with sales? Well, only everything. These two games are a metaphor for how sales people approach their job. What I mean is that in sales we often fall into the trap of thinking that every sales activity (like a cold call) is its own solitary event (War), rather than looking at it simply as one move in a bigger game (Chess). You can’t win a chess match in the first move, but you certainly can set yourself up for future moves and, ultimately, checkmate.

War is transactional, the same way that making a bunch of cold calls every day is transactional. We leave a ton of voice mails, begging for the prospect to call us back. And when they don’t, we give up after a couple of tries and move on to the next group of calls. It’s just a bunch of isolated activities that never make it easier for us down the road. If all you do is cold call today, then you will still have to cold call one, five, ten, 20 years from now.

Chess is strategic. It's a process. The move you made 10 minutes ago has an impact on where you stand right now in the game. Position yourself well and the end of the game becomes the fun task of just chasing your opponent’s king around until they give up. You can, and should, approach sales this way too. Instead of making a bunch of cold calls, start by sending out mailings (yes, actual paper mail) to establish yourself, follow up with an email, then a phone call, then another email, then invite them to an event, etc. Treat each of these activities as just another move that positions you for making the easy sale down the road.

So which sales game will you be playing?