Why Sales Deals Stall - and how to get them moving again 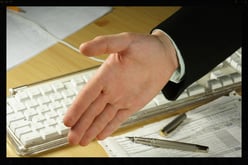 One of the most frustrating aspects of sales is when a seemingly hot deal grinds to a complete halt. That prospect that was in dire need of your services has suddenly stopped returning your calls and emails. So why does this happen, and what can you do to get the momentum back?

Here are the most common reasons that deals stall, and some ways that you can get them back on track.

You haven’t created enough demand or reason to change.

This is probably the number one reason that deals stall. They like you, and they think you would do a better job than their current provider, but you haven’t given them enough proof that their situation will improve. So, they are just holding off on making any decision, or they are looking at other options while keeping you in the mix.

How to get the deal moving: The ideal situation here is that you address this in the very beginning of the sales process, thereby avoiding this stall altogether. Strong differentiators and a compelling value proposition backed by quantifiable proof (case studies, testimonials, performance metrics) are the best ways to create demand and give them the confidence to make the change.

But in the event that hasn’t happened, all is not lost. Apologize to the prospect for not giving them enough information to make an informed decision. Provide them with as much proof as you can, and offer to have them speak your references. The key is to get them confident in making the decision to select you as their next provider.

Everybody is busy, and most of us don’t have full control over what our priorities are. While selecting a new staffing provider was at the top of your prospects to do list when you started, sometimes that gets trumped by other more pressing matters. Its not that this isn’t important, they just don’t have the time to focus on evaluating, selecting, and implementing a new provider right now.

How to get the deal moving: Share with them that you know they are busy, and that it seems as if other things have taken priority. If they agree, then ask them what the new timeline for making a decision is. If it is still fairly soon, then stay on track. If it is pushed out several months or indefinitely, then tactfully remind them of the initial urgency and offer to help make it easier so they can still get this critical project completed. Something like “Jim, I remember when we initially spoke this was a critical priority and you were wanting to move quickly. I realize you have a lot on your plate right now, and I believe there are some ways we can help you still get this accomplished without significantly adding to your workload.”

You haven’t been dealing with the decision-maker (or all of them).

Ever notice a deal is rolling along until someone actually has to make the decision? That’s a good indication that either you aren’t talking with the true decision-maker, or there are others involved in the decision.

How to get the deal moving: The one thing you don’t want to do in this situation is ask your contact if someone else is making the decision. Preserve their ego by instead saying “Are there other stakeholders that need to buy in before you can make this decision?” If the answer is yes, then discuss how you and the prospect can work together to get them the information they need to make the decision. The key is to move from sales/prospect relationship to partner.

The current vendor has started to show improvement.

Funny how the current vendor always seems to perform better when they think they are going to lose the client. And many times it works to at least slow down, if not completely stall the sales process.

How to get the deal moving: Share with the prospect that this is a common occurrence when the incumbent feels they might lose a client. However, they shouldn’t be fooled by this sudden upturn in performance, and certainly shouldn’t expect it to continue if they decide not to make a change now. It is also helpful to ask why it took the threat of losing business for the current supplier to perform at the level the prospect should be expecting all along.

Your prospect was never really committed to making a change.

Frankly, there are some deals you were just never going to win. We’ve all had the flirters and window shoppers that waste our time and drag us along. And when it comes time to make a buying decision, they can’t bear to let us down so they just stop responding to us.

How to get the deal moving: You don’t. Once you’ve identified that they are this type of prospect, you need to politely walk away. I’ve made the mistake of being led down this path by some prospects for months, even years. The best way to deal with the flirters is to stop buying them lunches and instead turn the conversation to business. Doesn’t mean you can’t be friendly or continue to build rapport, but it does show that you aren’t playing the game any more. If they are serious about making a change and you have created enough demand, then the sales process will continue. If not, then you’ve saved yourself future time, money, and frustration.

There are many other reasons why deals stall, but if you can identify the reason, you have a better chance of addressing the issue and getting the deal moving again.

The Handoff Is the Key to Maximizing Staffing Sales

So you’ve landed the big deal – congratulations! Now its time to get your recruiting team involved....
Read More

I’m a big fan of leveraging technology, and now more than ever there are some great resources for...
Read More

THE 4 Critical Sales Metrics You Should Be Tracking Today

Like an assembly line, sales is a process that builds on itself. Regardless of how many stages are...
Read More